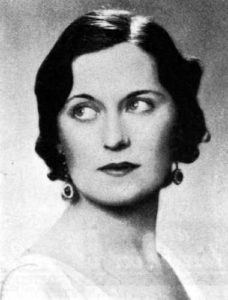 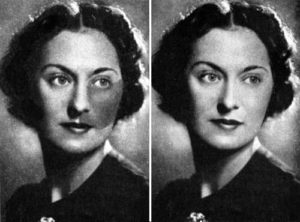 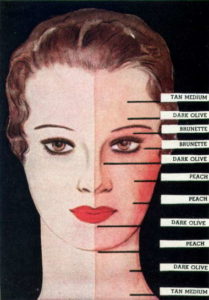 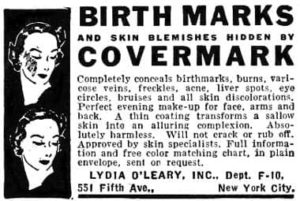 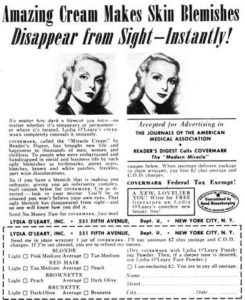 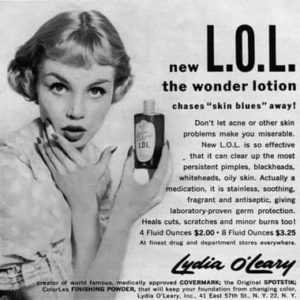 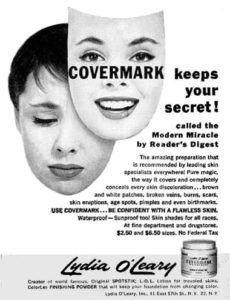 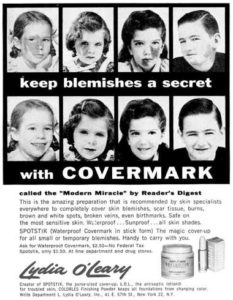 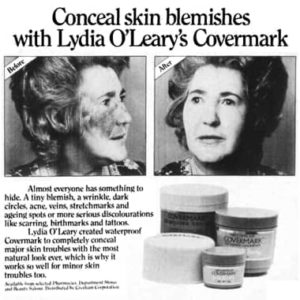 The Covermark line of cosmetics was developed because its founder, Lydia O’Leary, suffered from a large, raspberry-coloured birthmark – a port-wine stain or nevus flammeus – that covered half of the left-hand side of her face.

She developed Covermark to ‘cover this mark’ and in doing so introduced the world to new classes of cosmetics. See also: Concealers Lydia was one of six children born to Henry and Hannah O’Leary in Bedford, Massachusetts in 1900.

After attending high school she enrolled at the Fitchberg Normal School for Teachers, graduating from there in 1921. She then worked as a teacher for two years before moving to New York to work in retail. Unfortunately, according to legend, her attempts to get a sales job in any of the city’s department stores were rebuffed by job interviewers, who thought her facial disfigurement made her unsuitable for work with the general public. Lydia Oleary Above: 1936 Lydia O’Leary without and with Covermark. Exactly how she came to use make-up to cover her birthmark is an open question. One story suggests she got the idea while working as a placard painter, a job she took up after failing to get work as a sales assistant. According to this tale, after fixing a mistake by overpainting it, O’Leary wondered if she could cover her birthmark in the same way. The account may be a quaint fiction but it gets some support from the fact that the original Covermark was developed as a lotion and applied with a brush.

However, given that make-up was widely available in New York in the 1920s, it seems extremely unlikely that O’Leary did not first try covering her skin blemish with make-up or greasepaint, and only moved on to making something of her own after discovering that nothing suited her particular needs. Formulation The product O’Leary formulated – with the help of a chemist – was not without precedent. It had similarities with Wet White – a white body and face paint used in the theatre that was also popular for whitening the neck, arm and hands in the nineteenth century – and Calamine Lotion, a widely used medicinal. Wet White and Calamine Lotion are both liquid preparations made primarily of zinc, glycerine and water.

These ingredients were also used by O’Leary to formulate the original Covermark Lotion, although – as she needed a lotion with more covering power – she mixed them in different proportions. To work as a blemish cover her mixture needed to contain sufficient zinc to cover skin defects, but not so much that the mixture would lose flexibility, causing it to crack or flake. It was only after considerable trial and error that a suitable formulation was found.

The initial product was a liquid powder it appears that O’Leary soon switched to a cream which gave a better coverage. The proportion of the ingredients and the manner of compounding the same are preferably as follows: I take 2041 grams of the zinc powder (U.S.P.), or it may be zinc powder in some other form, as silicate of zinc (calamine); 720 cubic centimeters of distilled water and 300 cubic centimeters of glycerine and mix them thoroughly together for about ten minutes in a mortar with a pestle. (U.S. Patent: 1877952)

The base mixture described above is white but by adding pigments O’Leary could create a range of colours to match different skin tones. Given the shades she developed, it seems clear that she only had people with lighter skins in mind.

Flesh: Very Pale—Use only on unexposed parts of the body and for evening wear.

Pink Medium: Like Rachelle, but tending toward pinkish cast. Good for most redheads and very fair skins.

Peach: Combination of Pink and Yellow tones—Very good for blemish on the face, chin and nose.

The simple formula of Covermark could be easily copied so O’Leary attempted to secure a patent for it. Her application was denied by the U.S. Patent Office but fortunately for O’Leary a bit of theatrics at the Court of Appeals – during which she removed her make-up so that the judges could see its effect – created such an impression on the bench that her patent (US1877952) was granted in 1932.

Early developments By 1930 – at which time she describes herself as a department store buyer – O’Leary had developed the Covermark Lotion and was offering treatments through her apartment at 651 East Third Street in Pelham before moving to a studio at 11 West 42nd Street. Individuals would have been referred to her through friends, from dermatologists, or by word of mouth. Although she made a good deal of money from Covermark, O’Leary set high standards for her product and, as far as was possible given the technologies of the time, her product lived up to most expectations.

The object of this invention is to provide a dermal preparation to be used to cover an conceal birthmarks and other skin blemishes and to simulate the adjoining or unblemished portion of the skin in texture, flexibility and other purely physical qualities characteristic of the normal skin, and also in colour quality on the application to the preparation of a pigment appropriate to the particular type of complexion of the individual treated, and which shall be harness to the skin, avoid discomfort, and be adapted to withstand the presence of water and at least the casual contact of the hands or a handkerchief without being removed or appreciably disturbed. (U.S. Patent: 1877952)

Achieving the desired result required a good deal of skill to blend the pigments together, so that they covered the blemish and also duplicated the normal light and shade contours of the skin; a complex procedure. To help clients achieve a satisfactory result, where possible O’Leary – and other consultants – conducted an initial treatment to demonstrate to the client how to apply Covermark correctly. This consultation also enabled some colour matching to be carried out so that clients went away with shades that would work for them. As her business became established, O’Leary began to publicise it more extensively. She made appointments with newspaper and magazine writers in New York and used the ‘reveal and make-up’ trick that had proved so effective in the Court of Appeals to get stories written up about Covermark. I’ve had one amazing experience this month—probably the most amazing experience any person working in the beauty trade could have. A charming girl called at my office one afternoon. She said she had a new beauty discovery. Having heard that story before I remained calm while she asked me if she could please demonstrate it to me. Then she set to work and when she finished I was about ready to burst forth into tears. For she changed herself in just a few moments from a beautiful girl to one whose face was badly disfigured with one of those hopeless birthmarks. And then she did some work and transformed herself back once more into the beauty.

By 1936, O’Leary was conducting her business (Lydia O’Leary, Inc.) from a salon at 551 Fifth Avenue and her product range had expanded. The original Covermark Lotion had been removed from sale – replaced by a more functional cream – and a waterproof line had been included. Covermark Complexion Cream: “[U]sed to give the face the natural coloring that is concealed when one covers a blemish on the face.” Shades: Flesh, Pink Medium, Tan Medium, Dark Olive, Peach, Brunette, Dark and Sun Tan. Waterproof Covermark: “[W]ill remain intact throughout the day no matter how wet it becomes. Therefore it is also recommended for blemishes on the hands.” Shades: Light, Medium and Dark. Covermark Remover: “[D]issolves the Covermark and cleanses the skin without any rubbing. Excellent as a general cleansing cream.” Thinning Lotion: “The addition of a drop or two of the Thinning Lotion will restore the Covermark to its original state.” Covermark Spot-Stik: “[F]or the occasional pimple or minor blemish.” Shades: Light, Medium, and Dark. Special Finishing Powder: “Dries Covermark without changing color. Sets Covermark so that it lasts for hours. Essential for Waterproof Covermark.” (O’Leary, 1936) 1936-covermark-waterproof Above: 1936 Water-Proof Covermark and Covermark Complexion Cream By this stage, consultants were appearing in other cities across America and her products were becoming more widely available. Overseas distributors were also added, for example, by 1937, she was being marketed in Britain by J. Gaw & Co., later switching to Splendour Ltd., Nottingham.

As well as being used on serious skin blemishes like birthmarks, x-ray burns, varicose veins and vitiligo, O’Leary advertised her product as being suitable for broken veins, dark circles under the eyes and other minor blemishes. This made Covermark the first commercial product specifically designed as an all-purpose concealer. Spot-Stik Introduced in 1936, this stick product – later known as Spotstik – was an early attempt by O’Leary to widen the reach of her cosmetics. Produced and packaged like a lipstick it was designed to cover small skin blemishes like pimples. As an easy to use concealer that could be carried around in a purse, it predates similar products produced by the majors – Helena Rubinstein’s Conceal did not appear until 1942 and Max Factor’s Erace was first marketed much later in 1954.